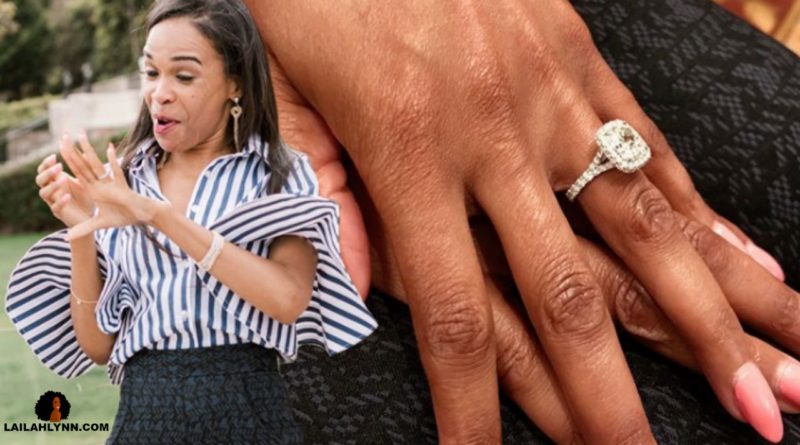 Congratulations are in order for Michelle Williams and Chad Johnson, who announced their engagement today! The two shared with People magazine that Chad proposed to Michelle in March of this year. After dating for nearly a year, Pastor Chad Johnson popped the question March 21 while on vacation in Pebble Beach, California, dropping to one knee and presenting Michelle with a stunning 5-carat ring.

And Chad also shared that he saved up 11 years for the ring that he would buy his future wife!

On my 30th birthday, everybody came and celebrated me. The next day, I woke up alone. I was so lonely. I had a little pity party. My personal life was lacking so much, and I was living so single. So as a response to that moment, I opened up a ring account, and for 11 years, I put $150 into a ring account.

Every month I’d put money into that account; I would just say, ‘My wife’s coming; this is for my wife.’ At 6, 7, 8 years in, I wanted to pull that money out and spend it on a sports car!”

But he didn’t pull it out, he continued to add to it.  And from what I’ve found, Michelle Williams ring is definitely around the price of a sports car.   It’s wayyyy more than what saving $150/month (even for 11 years) could get you.

The jeweler for the beautiful diamond engagement ring is L.A. jeweler Denis Mahgerefteh, who goes by @platinum_denis on Instagram.  He shared pictures of Michelle’s ring on his Instagram page – and even though he didn’t reveal the price, he did reveal that it is a custom ring from his UDE collection.

When it comes to pricing diamond rings it’s all about the Cut, Clarity, and Color. So I took a look at Denis Mahgerefteh’s UDE collection of engagement rings on his website and gathered details on two rings that resemble Michelle Williams ring.  The first is this cushion cut diamond engagement ring.  The center diamond is 4 carats and the pave diamonds surrounding the ring are almost 2.5 carats.  The website lists the average color as either F or G.  And the average clarity is listed as VS.  This diamond has the same cushion cut as Michelle’s engagement ring.

So using a diamond price calculator and entering these values:

Michelle spoke about the ring and said she actually saw a similar ring in February and took a screenshot of it like, ‘God, I would really like something like this.’ But didn’t want to tell Chad which ring to buy.  So she told herself whatever ring he purchased for her would be good for her.

But it turns out the ring that she took a screenshot of is almost identical to the ring Chad purchased and designed for her! So she felt like when God showed her the first ring it was actually a preview of what was to come!

That is so beautiful!

What do you think of Michelle Williams and Chad Johnson getting engaged? Do you like them together based on what you’ve seen? And, let me ask ya’ll,  what percent of your income do you think is enough to spend on an engagement ring for your partner? Leave a comment and let me know!