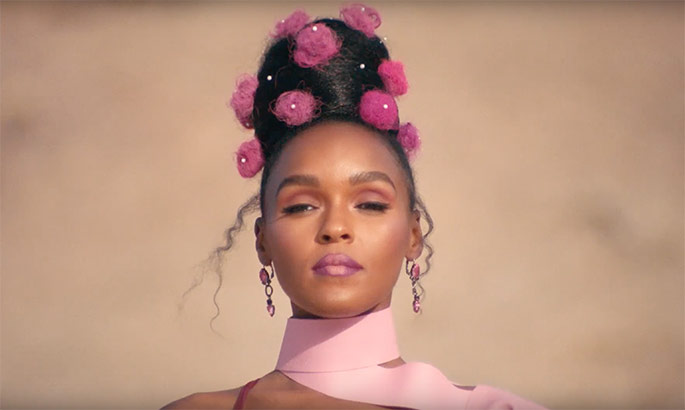 Janelle Monae and Tessa Thompson pay homage to the female anatomy in the video for Janelle Monae’s new single, “Pynk.”

The song is from Janelle Monae’s new record, Dirty Computer, which is due to drop on April 27.

The video opens with Janelle Monae and Tessa Thompson cruising through the desert in a pink convertible amid a pink haze, then breaking out into dance in pants that emulate the female anatomy.

In the song, Janelle Monae sings “Pink like the tongue that goes down, maybe. Pink like the paradise found,” while dancing in pants that emulate the female anatomy, with Tessa Thompson’s head appearing between her legs.

In February after the release of Janelle Monae’s song “Make Me Feel”, Tessa Thompson told Entertainment Tonight  “Janelle and I have been really close.  We’ve been really good friends at this point for about three and a half years. I’m so lucky to have her in my life.”

For months, there’s been growing speculation about whether Monáe and Hollywood star Tessa Thompson are in a romantic relationship.

However neither woman has issued an official statement to confirm or deny the gossip buzzing around the status of their relationship, and in 2013 when Monáe was asked is she was ‘into girls’ on the radio show Sway in the Morning, she refused to define her sexuality.

However, in more recent years she has declared herself an advocate of the LGBTQIA community and in an interview with The Guardian in February 2018, she explained that she now feels ‘sexually liberated’.

She said, ‘I hope that comes across. That people feel more free, no matter where they are in their lives, that they feel celebrated.  Because I’m about women’s empowerment. I’m about agency. I’m about being in control of your narrative and your body.

What do you guys think about the imagery in Janelle Monae’s new video?  Is it too ‘in your face’ for you? Or do you think it’s perfect for the message that she’s sending?