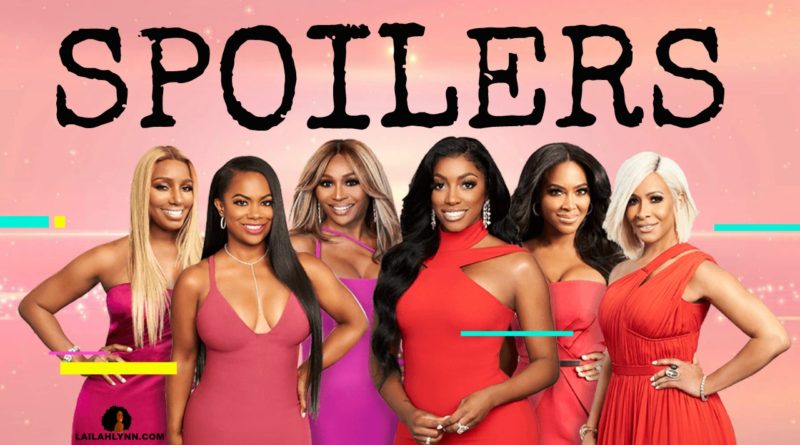 The Real Housewives of Atlanta Season 10 Reunion spoilers are spilling all over the place.

First, Love BScott is reporting that…

The seating arrangement is as follows (from left to right): Kenya, Cynthia, Porsha (Andy) NeNe, Kandi, Sheree.When Kim joins the ladies, Porsha moves to the left and Kim sits to the left of Andy. When both Marlo and Eva make their appearances, they each sit to the right of Sheree.

These are the major issues at the reunion.  Firstly, Love B Scott reports…

Kenya revealed that Marlo tried to blackmail NeNe with text messages from NeNe’s past relationship with John Kolaj. If you remember, NeNe dated John briefly while she was on the outs with husband Gregg Leakes.

As the story goes, Marlo got John drunk, he ended up at her house and she gave him a massage. During that encounter, Marlo took screenshots of explicit conversations between John and NeNe. Marlo threatened to share those messages with Gregg.

Other blogs are reporting that is was actually Porsha that revealed this bit of information, which makes sense since Porsha is the one that said she had tea on Marlo that she hadn’t spilled yet.  But either way, it was revealed that Marlo was trying to blackmail Nene.

In my opinion, it seems either Nene forgave Marlo for trying to blackmail her ORRRR the blackmail was to get Nene to pretend to be Marlo’s friend again so that Marlo can solidify her spot as a friend to the show, which yes, she does get paid for  and is really one of her only VERIFIABLE sources of income.

And if that is true, then the blackmail is working and Nene is basically pretending to be friends with Marlo again so that Marlo can solidify her spot as a friend to the show.  Which may be why Marlo is getting confessional interviews this year, when she wasn’t getting them in years past.

Nene and Kenya allegedly dragged Kim for hours about “Roachgate” and White privilege.  All of the ladies seem to feel ‘some type of way’ that Kim brings her husband and kids to film with her.  Then uses them as and excuse to stop taping and escape from whatever disastrous situation she’s created.  Like when they were all at Nene’s white party and Kim accused Kenya of having a fake husband.  Then Kroy came and rescued her from the scene.

According to B. Scott

During that argument, Kenya and NeNe went IN on Kim. Kim refused to acknowledge Kenya while she was sitting on the end — so Kenya got up and moved to the right of NeNe to make sure she got Kim’s attention.

Brielle was backstage at the reunion and tweeted about how “awful” she felt her Mom was being treated. 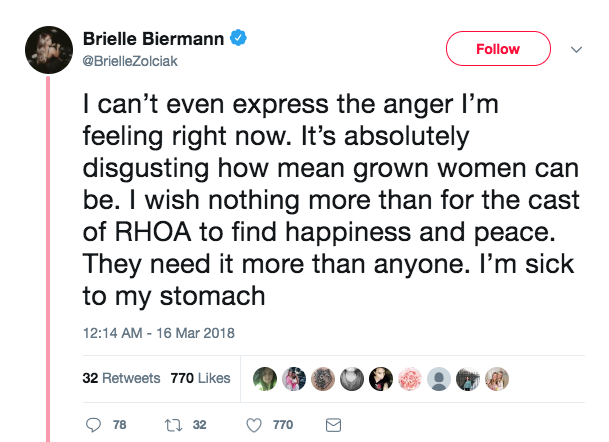 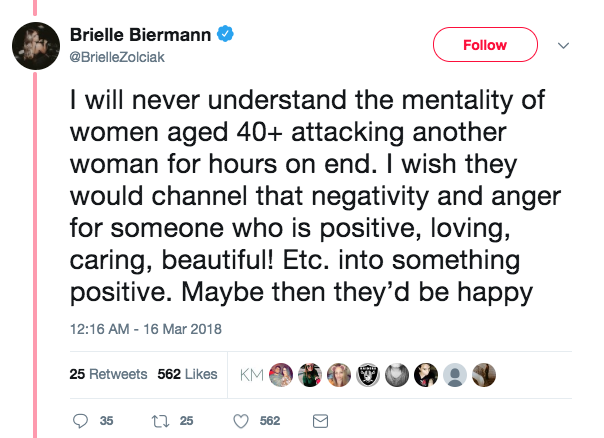 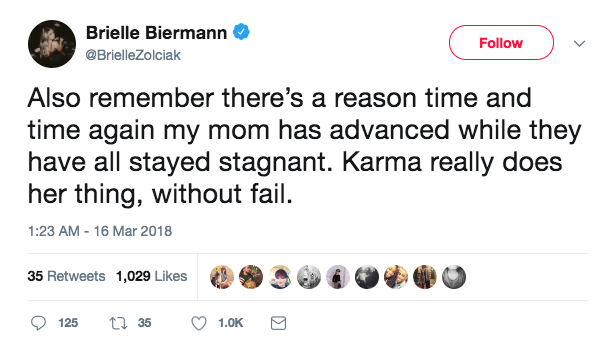 Nene also tweeted about the reunion. She said… 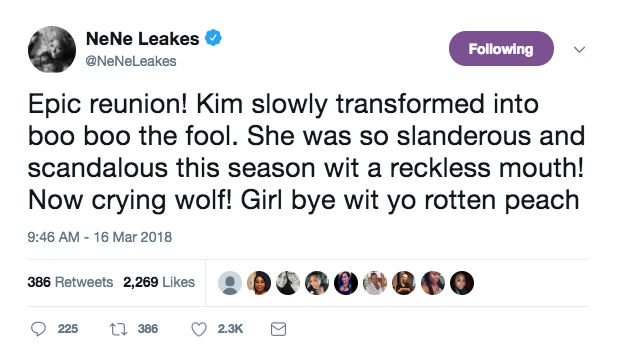 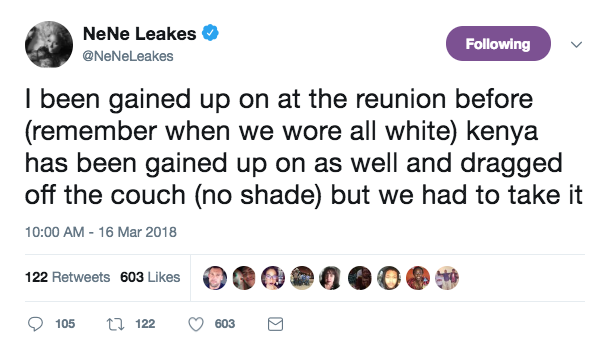 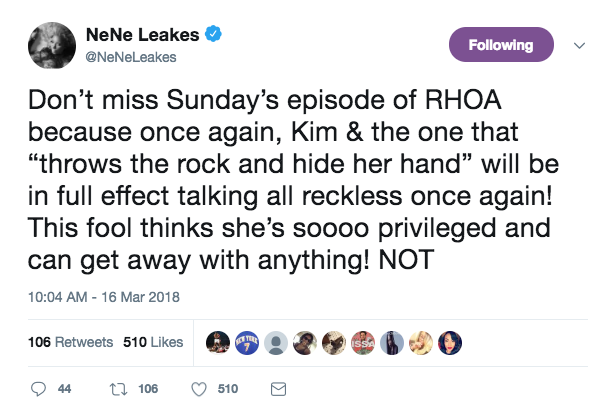 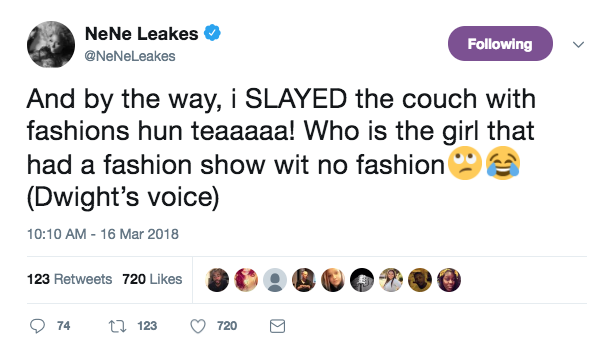 It is also being reported that Kenya revealed that she is pregnant at the RHOA Season 10 Reunion.  This is one cup of tea that I’m actually going to have to send back.  At one point in time, I did think Kenya was pregnant – around the time that she appeared on the Wendy Williams Show.  At that time, photos had surfaced of her at an IVF facility in the Bahamas.  And although she didn’t admit to Wendy that she was pregnant, she certainly didn’t deny it.

Well, sources are saying that she announced her pregnancy at the RHOA reunion.  And that this picture she posted on Instagram with the caption, “Never give up” was the confirmation.  But Kenya actually went back and edited the caption to clarify that it was not an announcement, just encouragement. 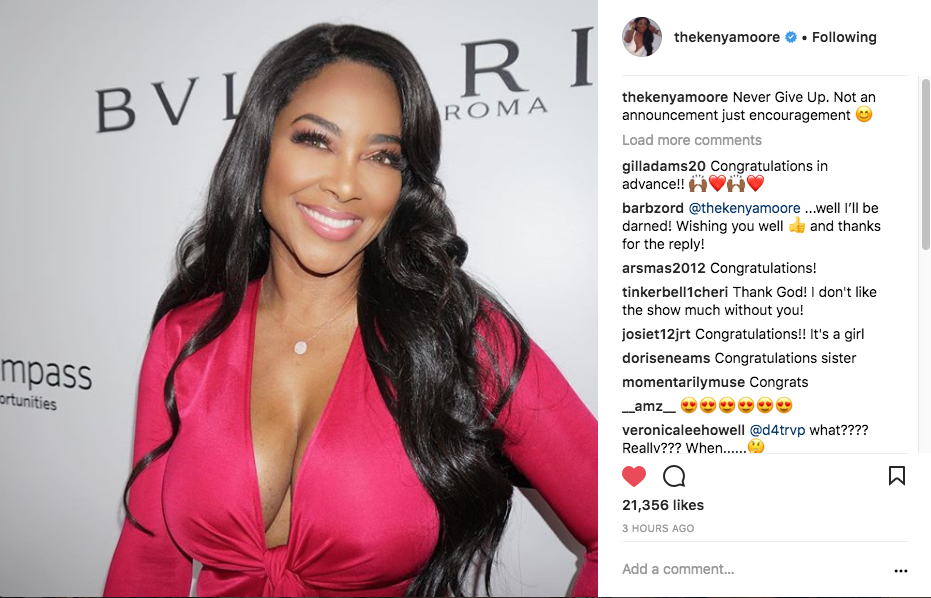 I do believe Kenya is trying to get pregnant. I just don’t believe she announced a pregnancy at the RHOA Reunion.

Lastly, Kandi took the RHOA Reunion as an opportunity to check Sheree for carrying other people’s bones, but not carrying the bone to her that Kim had said that Kandi “tried to eat her box.”  It does seem strange that Sheree can carry so many other bones back and forth between the girls.  But she never brought that bone to Kandi.  Or brought Nene the bone about Kim’s alleged “roach video.”