Tiffany Pollard, better known as “Miss  New York” from Flavor of Love, is denying skin bleaching rumors, even though her skin looks about 3 shades lighter than it usually does.

Tiffany was a brown skin chick on Flavor of Love, I Love New York, and every other show she’s been on.  But it seems here lately, on her Instagram, she’s become lighter skined.

Of course people have accused her of bleaching her skin.  Especially since she’s never really seemed comfortable with her looks.  She’s had more than a few plastic surgeries and even had to have corrective plastic surgery at one point when her breast implants became deformed.

So it wouldn’t be a surprise if she did bleach her skin, since she’s changed other things about herself! 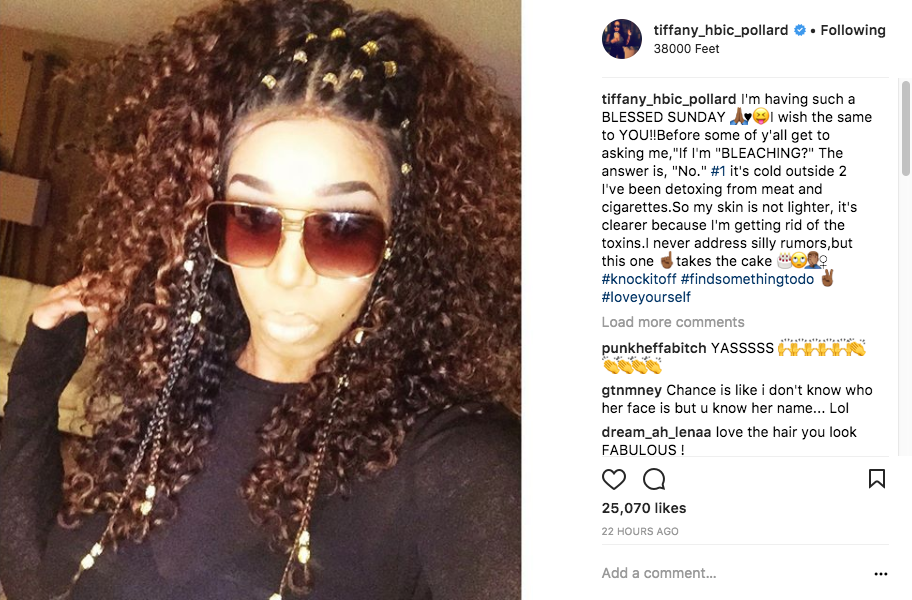 I’m so surprised that she’s actually giving up smoking! I remember she used to smoke like a chimney on Flavor of Love and I Love New York, so I’m happy to hear she’s giving up those cancer sticks.

What do you think about her response? Do you think her skin is just lighter from detoxing and quitting smoking?

To me, it actually looks like she’s just wearing the wrong foundation shade and using that selfie lighting that shines bright in people’s faces making them look lighter than they are.

I remember Tiffany actually checking Laura Govan about a colorism joke on “The Next Fifteen” a few years ago. So I think she’s proud to be of a darker skin tone. Laura jokingly said she wished there were more “light skinned people” on the show’s cast.    And Tiffany told Laura “if you are black, and you’re standing in it, stand in it in all shades” which sounds like good advice to me!