If you haven’t heard, the ladies formerly known as Xscape, have changed their name to Xscap3, to represent the three remaining ladies in the group.  When Tameka “Tiny” Harris, Latocha Scott and Tamika Scott perform as a trio they will be using the new name, Xscap3.  And when Kandi joins them for performances, they will use the original name, Xscape.

Like when the ladies perform at Essence Fest this year, 2018, it will be under the name Xscape, since Kandi will be there.

But when it comes to new music, the three remaining ladies will use the name Xscap3, since Kandi wants nothing to do with their new album.

“As soon as the girls and I started talking initially I had told them I didn’t really want to do new music and the main reason is because I feel like I don’t want to mess with our legacy. When we were a group we had three platinum albums, all of our albums were hits, we never had a flop album and things are not how they used to be back then.”

Kandi seems to be afraid that the next album from the girls may flop.  If you recall, her previous solo efforts – “Fly Above” and “Kandi Koated” – had very low sales, so she has “been there, done that” when it comes to recording new music and seeing it flounder in the NEW music industry.

She has also been very busy with her other endeavors, such as playing Mama Morton in the Broadway production of Chicago, which she explained to Bravo Andy when the group appeared on Watch What Happens Live.

In that interview Bravo Andy asked the ladies if they would be recording new music under the name Xscape without Kandi.   To which Tiny responded “well, we are Xscape.”

Tiny also recently responded to a fan on social media who asked the reason for the name change. 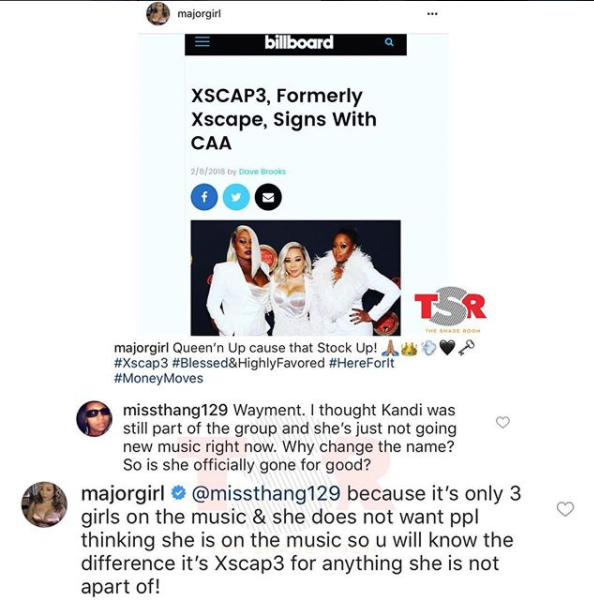 The fan asked if the name change meant that Kandi was gone from the group for good.  And Tiny responded saying that Kandi does not want people thinking she is on the new music, so they are using the new name Xscap3 so that people will know the difference.

But I actually think it goes a little deeper than that.  If you recall, when the group did their brief reality show, Kandi mentioned not liking the fact that the other group members added her name to a companyso that they could do business as a group, without getting her permission.

So being that Kandi doesn’t play when it comes to business, I wouldn’t be surprised if she had the other ladies come up with a whole new group name AND form a new company to do business under so that her name would not be involved AT ALL.