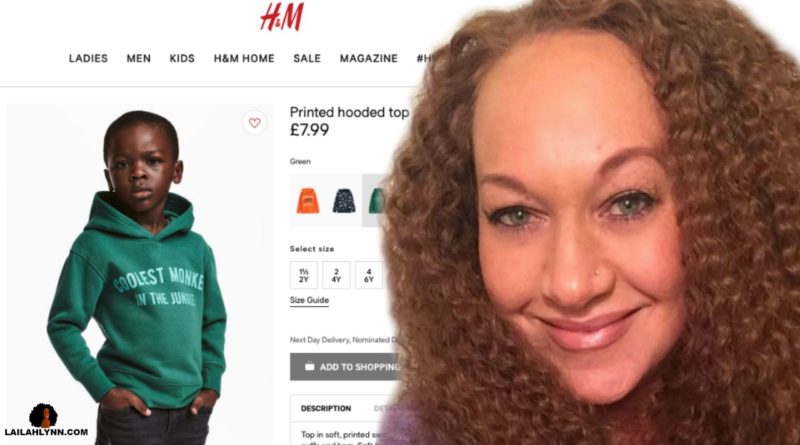 In case you missed it, the Internet has been going crazy these last few days over H&M’s poor decision to use a young, Black boy to model their hoodie with the slogan “Coolest Monkey in the Jungle.”  The choice of words is offensive to many Black people who, historically and up until today, have been called “monkeys” as a derogatory term.

H&M’s decision to use this slogan on a young, Black boy was not just ignorant.  For this hoodie, with this slogan, on this little boy, to get through their approval process shows not only ignorance, but a lack of cultural sensitivity and just outright laziness.

And speaking of laziness, Rachel Dolezal, of all people, is trying to make a profit out of this whole situation.

Rachel Dolezal has created her own line of green hoodies on her website that feature the slogan “Coolest Prince in the World”.  This slogan is what many celebrities like Diddy and Lebron James were posting as an example of what kind of slogans our children should be wearing on their chests instead of quotes about monkeys.

The description for the hoodie on her website reads:

This hoodie is a protest against the H&M sweatshirt “Coolest Monkey in the Jungle,” which the company posed a Black child for. Immediately, my gut turned when I saw this advertisement. My son was called a “monkey” in second grade, and none of the (white) teachers or school administration understood why he was offended until I showed up at the school and gave them a lecture on the historical context for this racial slur. After I demanded that the school have zero tolerance for this type of harassment, the child who harassed my son was suspended -and his parents were so offended that he was suspended that they actually pulled him out of the school and home-schooled him.

Race is a contentious issue in America & around the world, because the painful history of colonialism, slavery, Jim Crow and apartheid persist in present-day racist behaviors and attitudes. In 2018, there is no place for ignorance. This is the hoodie the child should have been wearing… just look at his handsome face & excellent modeling skills! Put your young prince in a hoodie that emphasizes his worth.