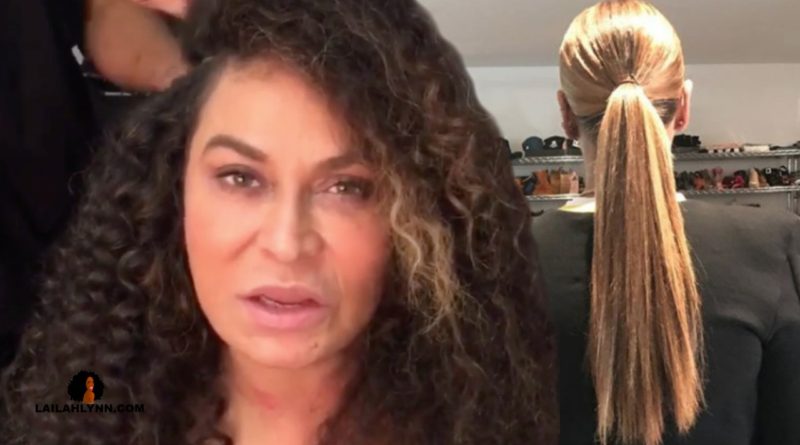 Ms Tina got on Instagram last night and bragged on Beyonce’s long ponytail. She said she was happy Beyonce grew her hair back, but some haters weren’t so enthused.

When Beyoncé’s longtime hairstylist Neal Farinah recently posted a photo of the singer’s curls with the caption “ALL NATURAL” and hashtag #naturalcurlyhair, the internet freaked out. Some were in awe of her luscious, thick mane, while others couldn’t believe that was Bey’s real hair. The two opposing sides escalated into a full-on war in the comments section. Neal ended up posting an Instagram video likely in response to the (totally unwarranted!) speculation.

Underneath wigs and weaves, black women have some of the most beautiful, curly hair. It’s a choice a woman makes. And that’s the choice for a black woman to choose to wear a wig or weave — if she wants to. Ain’t nothing wrong with it,” he said. “So, the myth of a black woman not having hair? Y’all think again. Because they have some of the most beautiful, textured hair. Recognize.

After saying his piece, Neal further made his point when he posted more photos of his recent work on Beyoncé with the caption “BEAUTIFUL NATURAL CURLY HAIR.” Some close-up shots of Beyoncé with long, straight hair had people up in arms once more after Neal wrote, “SAY WHAT: REAL.”

While no black woman should ever have to offer “proof” that her hair is real or defend it in any way, if anyone ever questioned Beyoncé’s blessed locks, they should look no further than her mom, Tina Knowles. Neal also reposted a video of himself and Tina that showed off similarly textured hair.

“People have been asking me how I get the natural, curly look,” Tina said in the video. “My hair is naturally curly. I washed it. I put it up. And Neal put a few curls in it to define it. I went on a boat and it got really frizzy last night, so it’s being curled again. I just want to show you how he did it.”

Neal demonstrated touching up her curls using a skinny marcel iron. “THIS IS HOW I SLAY THAT GOOD ALL NATURAL BEAUTIFUL CURLY HAIR: RECOGNIZE,” he wrote, “ANY QUESTIONS[?]”

Last night, Ms Tina got back on Instagram and bragged on how happy she was that Beyonce grew her hair back with a picture of Beyonce from the back showing off her long ponytail.

Some people were still hating and couldn’t believe that Beyonce could grow her real hair so long in just 4 years.

While others commented that of course your hair will grow if you take care of it underneath the wigs and weaves.  What do you think? Do you believe this is Beyonce real hair? Or do you think she still has in some clip ins or some sort of weave?