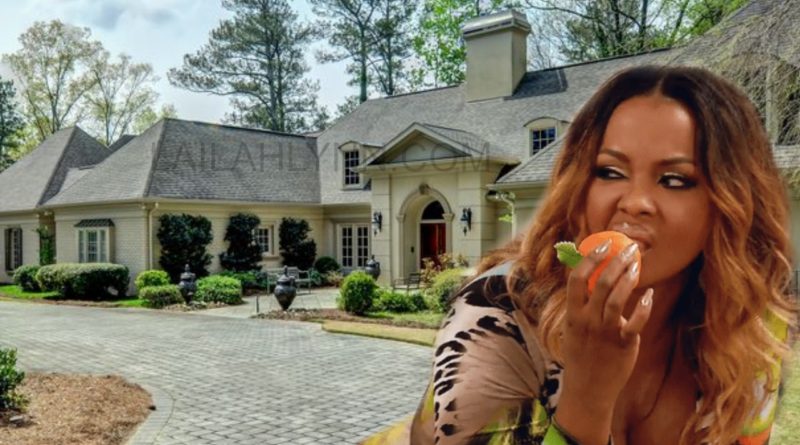 Phaedra Parks has been going through some real estate drama recently and the Atlanta blogs have been catching it all.

First, she purchased a new home in December 2016 for almost 2 million dollars.  The selling price was $1.91 million to be exact.  And apparently that home was one of the major points of contention in her divorce from Apollo.  Apollo accused Phaedra of hiding assets in the first divorce that was granted, and that’s why he filed divorce papers against her for a second time.  He wanted to FORCE her to list all of her assets, including this new home.

And as you know, the second divorce was granted and the details of it were sealed.

In June, the blogs reported that Phaedra placed the home she shared with Apollo up for sale.  Pictures leaked from an open house that she held in July showing the babies bedrooms and everything.

And now the blogs have gotten ahold to a listing of Phaedra’s new home that is up for rent.  Allegedly, since she is no longer receiving a Bravo check, she’s not able to afford the upkeep on her new home, so she has decided to rent it out.

Hopefully, Phaedra is not currently living in this home with her children, because the address is all over the Internet.

Zillow listed the address of the house (which I have blurred out) and a rental price of $10,556 per month.  Now when Phaedra was selling her previous home she was smart enough to use a boutique real estate agency that did not post public listings.  But with this house, she did allow the listing to be posted publicly.

Then when the blogs got ahold of it, she snatched it down and claimed it was never for lease.  She wrote on Twitter,

Rumors my house is for lease is a lie.

If you’re so trifling & need a place to stay I may consider letting u use my guest house. Going bk to my vacay. #MarthasVineyard#unbothered

Now this is what I think….

You guys know Phaedra is a lawyer or lie – awyer, however you want to pronounce it.  And she tends to sometimes stretch the truth.  Not necessarily LIE, but just  s t r e t c h the truth until it’s almost unrecognizable.

When I look at what she tweeted, I see that she specifically said that her house is not for LEASE.  There is a slight difference between RENT and LEASE that we should all be aware of, especially when dealing with Phaedra Parks.

Renting is short term, like month to month rental agreements.  Whereas, leasing is for long term agreements – like 6 months to a year.

I also think this may be the case because in her next tweet she actually says,

If you’re so trifling & need a place to stay I may consider letting u use my guest house.

which confirms my theory that she is using the house as a guest house – which is available to rent for short periods of time, but not available for long term leasing.

Y’all know Phaedra is a tricky one! And she’s also very smart, but at times she’s not as smart as she thinks she is.